This article explores if there are cognitive limits to the number of individuals humans can maintain meaningful social relationships with. And in case of such limits, does the era of social media defy it all?

Gone are the days when you had a handful of friends  who would remember your birthday and send you a card from no matter where they are. They would send it well in advance to buffer postal delays and you usually would get it just in time. Fast forward, we are now part of the “highly efficient” era where wishes pour in thousands. We just get on the virtual roof top and shout it out loud “Happy New Year All” and our work is done. It just seems that the effort of maintaining relationships has immensely reduced. Perhaps technology is enabling us to maintain more relationships or does it in the real sense? Let’s probe in a little deeper.

Let’s say you have 1000 friends on your Facebook friend list – how many friends have you for once sent a “one to one” message?  how many of them have you picked up the phone and talked to? Not all thousand, I am pretty sure and probably not even half. There is a pretty good reason for it and the reason is “Dunbar’s number”.

Robin Dunbar, Professor of Evolutionary Anthropology at the University of Oxford, believes that the cognitive limit to the number of individuals humans can maintain social relationships with is at 150. 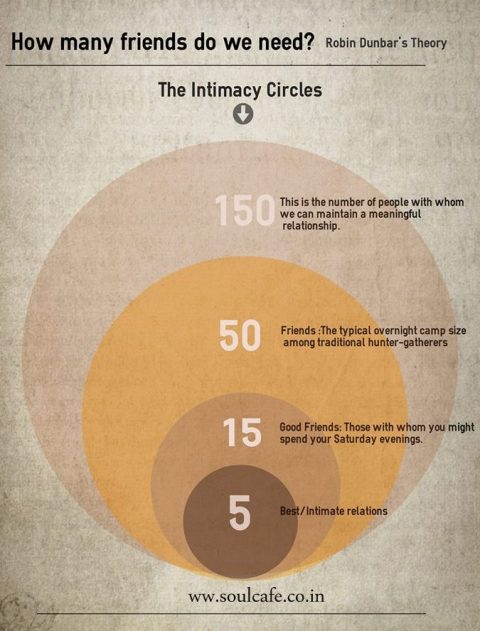 Based on studies with primates showing that there is a correlation between the size of their social groups and the size of their brain’s neocortex, Dunbar speculated in a 1992 paper that this correlation could be extrapolated to humans and predicted a group size of approx. 150. This number is popularly referred to as the Dunbar’s number

Dunbar provides us with a Fibonacci series for relationships. This can be represented as concentric circles – the circles of intimacy. The innermost circle is a group of three to five, our very closest friends/family members. Then there is a circle of 12 to 15, the friends that we can turn to for sympathy when we need it, the ones we can confide in about most things. Then comes 50 – you see them often, but not so much that you consider them to be true intimates. The figure of 150 seems to represent the maximum number of individuals with whom we can have a genuine social relationship, the kind of relationship that goes with knowing who they are and how they relate to us. Beyond 150 there are further rings: 1500 , is the average tribe size in hunter-gatherer societies, the number of people who speak the same language or dialect.

Interestingly Dunbar found that the average group size among hunter-gatherer societies was 148.4 individuals. Company size in professional armies, was also remarkably close to a hundred and fifty. At the opposite end, the companies formed battalions that ranged from 550 to 800, and even larger regiments. Malcolm Gladwell in his book “Tipping Point” popularized Dunbar’s theory. He pointed out that organizations suffer from a sharp productivity loss when growing larger than 150 employees. Hence companies such as Gore, organized their teams in smaller groups, so that they could keep strong working relationships.

If we closely watch social media, we can observe a migration of social interaction from Facebook to WhatsApp. A study last year involving 1,70,000 internet users across 32 countries, found that more and more teenagers are spending more time on instant messaging apps than on Facebook. Even though Facebook has more users, activity such as photo sharing and messaging has fallen off by 20 percentage points in the last two years. Dunbar’s theory could explain the phenomena. The migration of activity and interaction could be the outcome of the need to maintain relationships in smaller concentric circles that makes more sense than the roof top announcement to a 1000 member battalion. But if the WhatsApp groups grow larger than the threshold number one would again see the same pattern of migration or the groups would just thrive on superficial interactions. Similar patterns can be observed in gaming communities.

Even if we speculate over the accuracy of the magic number 150, the truth of the matter is any relationship demands our time resource – the closer the relationship more needs to be the time investment. With time resource being fairly constant for all of us, we could spread too thin when the number of acquaintance that we try to keep a track of is too high. Generally it’s a 60/40 rule – you spend 60 % on your core relationships and 40% to general acquaintance and if you make it the other way round the closer circles get impacted.  Hence it makes sense for us to have a closer look at how and where we spend our time and decide for ourselves – how many is too many? That number need not be the same for you and me. 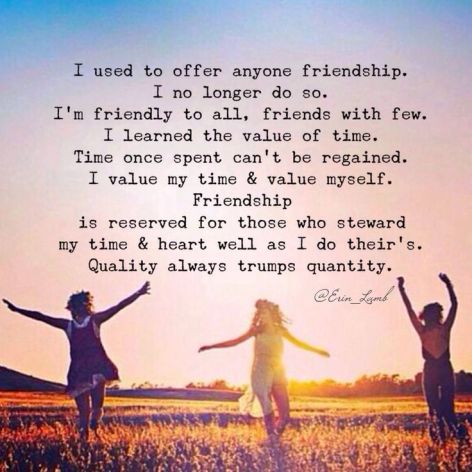