Oscar Wilde once quipped, “The one charm about marriage is that it makes a life of deception absolutely necessary for both the parties”.

This alone could have been a great billboard poster for inviting gullible and not-so-gullible sign-ups to the infamous Ashley Madison site. They called out to people around with a tagline that went something like – “Life is short; Have an affair”. When the Ashley Madison hacking went viral online, almost every social media and news media site went about dissecting the whys and why-nots of infidelity. Exclusive clubs like Ashley Madison taps into an otherwise seemingly normal, functioning and a mature, sophisticated society looking for the biggest loopholes in human psyche – the never-ending need to be validated through love, intimacy, romance, acceptance, companionship etc.,

Broadly speaking, anytime we breach the sacred indenture of lifelong commitment to a significant other in any form or manner would constitute to be infidelity. Ester Perel, relationship therapist states that the key elements in an affair are – a secretive relationship, an emotional connection to one degree or another; and a sexual alchemy.

According to “dating” site AshleyMadison.com, a site that helps married people to find people to cheat on their spouses with, found that their busiest days for signup were the day before Valentine’s Day (for men) and the day after for women.  According to the site: “While February 13th — also known as Mistress Day — saw a 271% increase in signups, there was actually a 314% decrease in signups on Valentine’s Day itself. The most prolific traffic came the day after Valentine’s as 439% more people signed up to find what’s missing in their marriage. The huge spike in signups on the 15th was mostly driven by married women: their membership increased by a whopping 977%

What does this show us? A degree of failed expectations, perhaps. What else? There are psychological, sociological, biological, and anthropological perspectives to be analyzed and taken into consideration. Dissatisfaction, Media and economic influences, Personality traits, Age, Gender, Prospects and Environmental influences are all possible catalysts to making us stray away from the path of being faithful.

“Infidelity is an opium of unfaithfulness.” ― Toba Beta, Master of Stupidity

Dissatisfaction is a primary motivator for people to look outside of an established and committed relationship. The need for variety, excitement, engagement, reassurance, stability and acceptance emotionally and physically make us all prone to various degrees of betrayal – from strongly entanglements to mere straying outside of our committed relationships. When our expectations fail, we also tend to feel deprived, to some extent is just another outlet to seek approval and get acknowledged; an excitement that from an air of mystery, a sense of adventure and the chances of discovering something new!

Personality traits are a common area of interest to researchers. Maybe this has a stronger influence than any other factors as at one point or the other, our thoughts, emotions and feelings are a prime to what ensues as an act of disloyalty. It is never easy to cheat although it seems like based on numbers. There are many inner contradictions and questions of morality, values and faith that haunts the one who is betraying. It is not as if one grows out of love in a sudden moment. Infidelity is a slow act of taking one step, out of the committed relationship, at a time. People who are narcissistic, selfish, egocentric and seeking thrills, of “avoidant” personality types (commitment-phobic), BPD(people with Borderline Personality Disorder) and those who are not very empathetic of other’s feelings are most likely noticed to be on the cheating spree.  This may not always be the case but for most part is true. There are also people who can convince themselves as “righting-the-wrong”. It just needs an act of trivializing which our conscience is well-trained to do. Cognitively speaking, we can sideline the burning pangs of shame and override it with elaborate reasoning as to why it is justified to look outside of the relationship for comfort and companionship. Sometimes, due to our own pains and pangs, we could think betrayal is like teaching a lesson to our apparently disappointing partners.

Age is also a very crucial factor. Mostly, either young people or older folks are more prone to cheating. The ‘safe zoned’ middle are the ones who have somehow managed to take their focus elsewhere – busy making careers, buying homes, planning babies or rearing young children. Either there is constant seeking of ‘newness’ when one is too young or an unending fight against ‘boredom’ as one grows old. It is also said, people approaching key milestone ages often re-evaluate their lives and are prone to becoming suddenly unfaithful.

Prospects entice us a lot too. The prospect of a better experience, thinking something could lead to a better future, the prospect of finding happiness – this list could go on and on. The need for us to find meaning in inherent relationships –either as physical intimacy or emotional connection and the hope that we can find this elsewhere will spur us to probably check out the forbidden fruit.

Media and economic influences are as influencing as any other factor. The internet makes it all the more easy to meet someone new. The digital age has facilitated a total “guilty free” alluring to acts of adultery and cheating. It is more affordable to seek frontiers on the stealth-mode, to keep secrets.

Sometimes it’s actually people who are happy in their existing relationship and with no intention to break it, cross the line. And we seem to wonder why? In fact it isn’t their  partner that they are turning away from, but rather the person that they have themselves become over the course of time. It isn’t so much that they are  looking for another person, as much as they are looking for being “another self”.

Honestly, there is not always a black or white, discrete  rights or wrongs in these stories of infidelity – they come in various shades of grey. What we need to understand is – infidelity is always a matter of choice and never an accident.

So is Fidelity – it is a CHOICE, albeit a tough one! It will require a great deal of will power, determination and trying to put in our beliefs entirely in our committed relationship. Knowing we are all human and not perfect gives us the inspiration to stay the course in our relationship and work things out. We can embrace fidelity simply by the act of renewing one’s choices to be in a given relationship. When we teach ourselves to remember why we fell in love with our partners in the first place and why they loved us back, when we learn to fall in love again each day, when we summon our will powers to make a choice to refuel our relationships every now and then with things that would bring excitement and passion, when we learn not to give in to fancies and passing flirtations and when we use our inner cores to be the guiding light to steer our relationships, then yes, we won’t cheat.  This means we need to choose our partners with our souls not simply minds and hearts. We need to be sure that there are various shades to the rainbows of real life and we are ready to embrace the colors without having to go in search of a particular hue. They will still be contributing factors but we can understand them, the causes and the effects. 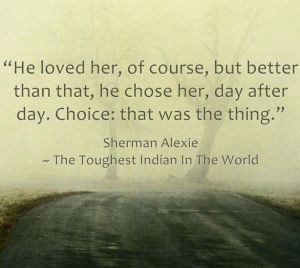 In an era where we are lured by all the choices, where  monogamy has started to sound like a concept from the bygone era and  where the consumerist culture encourages us to replace things that could be easily mended – It simply is a matter of CHOICE one makes  to love  “the one”  day after day, year after year. Concluding with a quote from Ester Perel, a relationship therapist from her talk on  Rethinking Infidelity.

“And I’ve told quite a few of my patients that if they could bring into their relationships one tenth of the boldness, the imagination and the verve that they put into their affairs, they probably would never need to see me.” – Ester Perel, Relationship Therapist

Note – Stay tuned for “The Anatomy of Infidelity – part 2″ where we explore infidelity from betrayed upon’s perspective and relationships post betrayal.